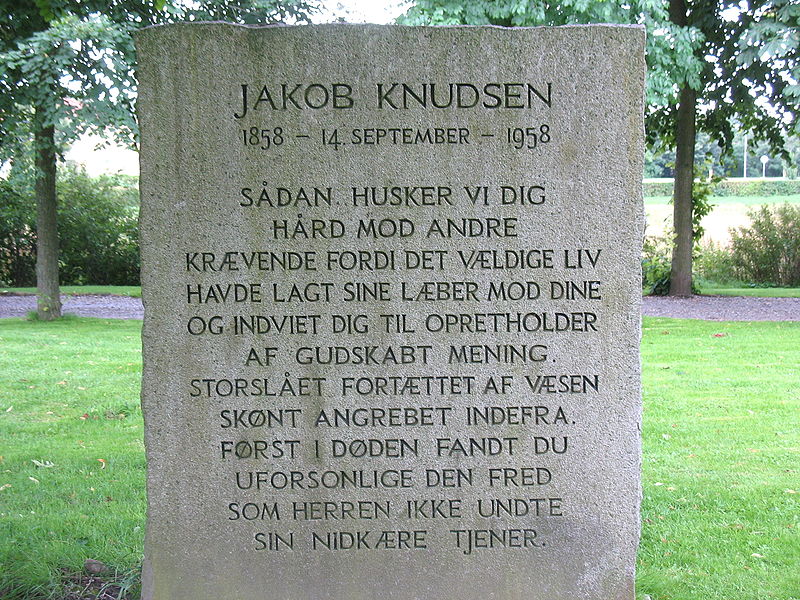 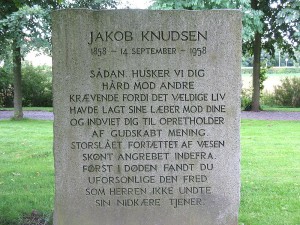 Picture: Rødding: mindetavle for Jakob Knudsen – by Hubertus45 via Wikipedia.

The stone on the picture can be found on the grounds of Rødding Højskole. It bears a text referring to Jakob Knudsen as his father was a teacher on this school and Jakob therefore born there.

When I came across it on the internet I had never heard of Jakob Knudsen but the text on the stone made me curious. I read more about him on the “Arkiv for Dansk Litteratur” and a few days later I bought “Lærer Urup” in a second hand bookshop.

The main character of the book, Lærer Urup, (“lærer” means teacher) is supposed to, more or less, mirror the views of the writer himself. Jakob Knudsen had some clear points that he wanted to make, and the book therefore has a clear theme right from the start. Not much time is waisted to explaining his theories with the help of examples interwoven into a storyline.

To make it all digestible the book is written in a popular tone in a daily language, dialogues even written in several dialects.

The story is about a teacher and his controversial theories about religion, society and education. These theories bring him into conflict with a. o.  the local priest of the village where Lærer Urup is starting out as a teacher, and the discussions between these two gives the writer plenty of opportunity to explain his views. Soon after his appointment the teacher gets criticised from different directions but he stays firm and true to his believes which result in complications that form the main elements of the storyline of the novel.

The novel is interesting, it has its main strengths in the opinions and views of the main character. The story itself is not too well written in my opinion, some parts seem to be realistic and truthfully descriptive, other scenes are more theoretical and give a rather black and white description of characters and situations. I felt that too much was happening and as if that was done to attract a wider audience.

Lærer Urups views are interesting however, and his bold statements make them very clear.

His religious views are based upon the idea that it is up to humanity to make life on earth bearable. God is light, truth, joy, freedom and love and he created the earth and its nature. But it is up to the humans to create a society and make it work. Strict rules are necessary, punishment and even force as well.

It is on the other hand important for Lærer Urup that people can make up their own mind and that they should not be forced to think or believe what society tells them. Physical and spiritual freedom are two opposites for him.

His criticism upon society, written in 1906, can still be used for contemporary society, it might as well become popular again soon. The book discusses subjects that will probably never be out-dated.