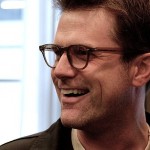 After reading a post by Merlin Mann on the process of starting a project (and to keep going) and after listening to Elizabeth Gilbert in a TED-talk mentioned in the post about nursing your creativity, I understand that they offer a way to deal with one of the major obstacles for writers..

We all know it basically comes down to the old truth of “ You just have to work for it and all will be well”, but it is not so easy in practice for the majority of us..

Both clearly indicate that writing on a daily basis is the key to getting work done and creating possibilities to get inspired during the process. As Merlin puts it in a Tweet:

.“Creative work, summarized: In the time you set aside each day to work your ass off, ignore anything that makes you consider stopping.”

.To be able to do this for a longer period – what about a lifespan? – is undoubtable the key to success. As Merlin stresses, this “anything that makes you consider stopping” is no sinecure.

.The majority of those threats that endanger continuation are based upon fear, and this means fear in all its facets. That is easy to say as fear rules just about anything in our world, but when it comes to for example writing it is all the more clearly. Writing is listening to the voice within, digging for inspiration in the depths of a human being, listening to all the tails from the incredible feedreader in the unmeasurable caves of our head. And what voices will be more loud and clear than the ones that originate of fear?

.To ignore those voices and to keep digging for the gold is a major achievement, reminding me of many classical stories, like for example Frodo in “The Lord of the Rings”. Being a writer, an active and serious one, is going through a lot of darkness, traveling on a seemingly hopeless journey like Frodo did.

.But it is also a quest, something that has to be done, for not doing it equals giving up and letting life age you without truly saving your soul.

.In her speech on Tedtalk.com Elizabeth Gilbert tells about her way of dealing with the voices of fear. She admits that they are a serious threat to her existence as a well-functioning human and comes up with a solution. Although being aware that it is not the only and most dependable system possible she states that it does her good and advocates to people to try it out for themselves. The idea originates from ancient Greek and Roman times, and it is not only for that not a revolutionary new idea, but Elizabeth gives a positive approach to it that can be a great relief to many.

.Her “trick” is to put the source of inspiration outside the person and thereby putting the blame for many of the problems the voices in head come up with outside herself. It is in that way not her responsibility to produce another flawless bestseller or her fault when the day’s writing isn’t flowing at all, but it is the inspirational voice from outside her that lets her down. Following old Roman traditions she calls this voice a genius.

But unlike romantic ideas of writers, or any other creative persons, being struck by a sudden moment of inspiration, like an arrow of cupid’s bow, she definately holds on to the idea that all she has to do to let her genius work for her is to show up and work every day. That is the only way to blame her genius and not her, because she was there, writing at her desk, giving the genius a fair chance to work.