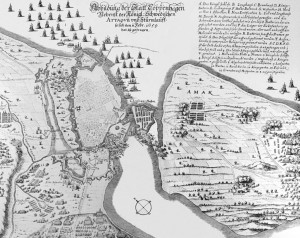 Map of the main attack by the Swedish army on Copenhagen on the 11th of February 1659. Source: Wikipedia

When listening to the danish language program Sproghjørnet I heard a discussion about the word “Prøvesten”. It was said that besides being a stone to test whether a material was what it seemed to be, for example gold,  it had also been the name of a ship. This ship, together with other ships, was after ending its duties, sunk to form the basis of a little Island called Prøvesten on which was build a fortress to defend Copenhagen.

I went looking for this little island on the internet and saw that it is now part of Copenhagen harbour, well connected to the mainland. I also found this map showing the little island of Prøvesten but also the rather immense defense works of Copenhagen. I had hardly realized that those remains of the defense system still exist and that Copenhagen had once been fortress like that. I came to think of this post of Cristhoper’s picture blog with the text explaining about an amazing long siege of Copenhagen.

It struck me that there is a lot of focus in Denmark on the prehistoric times of the Vikings and before. An enormously rich and unique period of Danish history, but there have been other times, much closer to ours, that have been of major importance to the present state of this part of the world.

I know a tiny little bit about Swedish supremacy and Danish invasions and interests in the south of Sweden and the Danish interests in the north of Germany. There must have been many wars and events, but it is not a very common thing to discuss this period in the media or elsewhere.

Was Copenhagen indeed such a strong fort as the remains of its walls suggest?

Being a Dutchman I remember a story from Danish history books about the Dutch “helping” to free Copenhagen from a siege by the Swedes, and I wondered if it was a part of the same story.

It is quite amazing to notice that finding information about this period is not that simple. The internet is great, fantastic, but sometimes it is clear that it is also still young and under development.

Luckily there is Wikipedia telling about the long siege of the apparently well defended and walled city of Copenhagen in 1658 to 1660.  And indeed it is confirmed here that the intervention of the Dutch fleet was a major help that probably saved the town. Wikipedia states (without naming a source) that Dutch marines even helped on land, o.a. in this fragment:

“The moats and the beaches had been kept free of ice, and now the ice free zones were widened to 44 feet with the help from 600 Dutch marines. The ice was thick, and the work was done in heavy snowfall from 4 o’clock in the afternoon till evening on the 10 February.”

After reading a little bit more about this Swedish attack on Denmark I now understand that Denmark was on the verge of being wiped out completely. A major event as big as the defeat against Germany in 1864. The latter being more often mentioned and commemorated, probably also because it is not that long ago (as a result of this war parts of south Denmark became danish again as late as in 1920). But where as the teaching of history and the culture and identity of the Dutch is mainly based upon the 17th century, it is in Denmark an eventful period that seems to be outside the main interest or perhaps overshadowed by other periods.