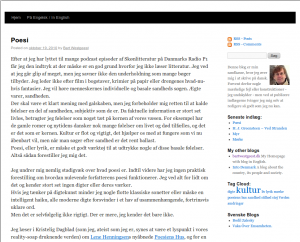 As ever I have trouble finding out which language to use when I write, and who knows, even when I think. I have been writing in English the last years, but I try to speak Danish in my normal life (not to mention the other languages that are running around somewhere in my head).
Lately I started writing some more things in Danish, and as I didn’t know where to put these on this English blog, I decided to add a wordpress.com blog in danish to it. Just to keep things gathered in the right places. I’ll just see what happens with it, as I don’t want to force me to use a certain language. When I read a book in Danish or Dutch, my natural reaction is to write about it in its language, and the same happens when I listen to a radio program, a video or whatever.

For now I decided to try not to worry about it, even though I know that as a result of changing languages none of them will perhaps be used in an eloquent way, but I will put my trust in the eventual power of simplicity. I have to.